Something Fishy Has Been Up 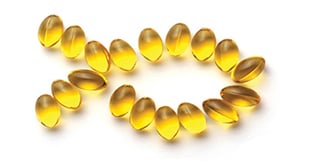 I never denied it, you know I love the microbiome. In fact, I’m a little obsessed with these microbes that line our insides, right?

In my love of these bugs, I realized I may not have been paying adequate attention to the latest news regarding some old tried and true wellness tools. It’s tough to not get side-tracked with all the glitz and glimmer of health headlines focusing on the micobiome1-2 and vitamin D3-4. Still, even with being a big fan of gut bugs and having a high respect for this famous vitamin-prohormone; one recent study manged to shift my focus away from their accolades and back to a very “fishy topic.”

However, before I get into this study, I want to help clear the good name of fish oil! Then, I’ll follow up with another blog on how essential fatty acids may be a key player into making room for a kinder world…seriously!

There were two studies that particularly made my nose turn in up in their attempt to slander fish oil efficacy.

1.  The first study was published in 2012 and was a JAMA review article.6 The authors retrieved 3635 citations relating to fish oil and cardiovascular outcomes and included 20 of those studies for a metanalysis of 68,680 patients. Unfortunately, there were several issues with the review of articles that the authors based their negative conclusions on, stating that, “omega-3 PUFA supplementation was not associated with a lower risk of all-cause mortality, cardiac death, sudden death, myocardial infarction, or stroke based on relative and absolute measures of association.”

First, six out of the twenty studies used olive oil as a placebo. This is not an optimal placebo for determination of an effect, as olive oil contains heart-healthy polyphenolics, which have been correlated with cardiovascular benefits.8 This would bias the results of favoring omega-3 PUFA supplementation. Furthermore, they included a trial which studied the effects of fish oil on heart attack survivors a suboptimal delivery method. The trial divided subjects by randomizing them to several groups of margarine supplemented with EPA and DHA (400 mg), ALA, EPA/DHA and ALA, or a placebo. This trial – which was comprised of 16.9% smokers (24.2% of them being obese) and allowed for the consumption of a known-heart damaging trans-fat with a minuscule amount of EPA/DHA – was set up for failure!

Furthermore, several of the trials used less than 1g of EPA/DHA. This is not a therapeutic dose for effectively mitigating the risk for cardiovascular disease.9-10 In fact, the mean omega-3 PUFA intake overall was only 1.51g/day.11

Finally, 13/20 trials were based on secondary prevention and 4/20 for mixed primary and secondary. This means the authors didn’t assess if fish oil was effective in preventing cardiovascular disease in those that never had a disease event. These poor participants were already swimming upstream (pun intended).

The reason this study caught so much backlash from the health community is because it was an outlier, not a noteworthy gamechanger.11-12 In fact, the American Heart Association holds a position that, “Research has shown that omega-3 fatty acids decrease risk of arrhythmias (abnormal heartbeats), which can lead to sudden death.  Omega-3 fatty acids also decrease triglyceride levels, slow growth rate of atherosclerotic plaque, and lower blood pressure (slightly).”13

2.  The second trial that also smelled fishy was part of the notorious Selenium and Vitamin E Cancer Prevention Trial (SELECT). The study assessed for the relationship between risk for prostate cancer and levels of long-chain omega-3 polyunsaturated fatty acids (LCw-3PFU). The findings correlated those men with the lowest quartile of LCw-3PFU with the lowest risk of prostate cancer. Subsequently, those with the highest level were associated with a 71% more likely chance of having a high-grade prostate cancer.

There were several issues with this trial in design. This study was a retrospective, subcohort, correlational design study.14 This means that the authors based conclusions on an intervention that didn’t control for dosage, baseline values, or effect size against a placebo. Furthermore, the authors of this trial did not have the original intent of testing the fish oil’s efficacy, rather they pulled data from a subpopulation of the original trial. Also, the test itself may not have accurately demonstrated levels over time, as there was only one blood draw.

Unfortunately, the source and type of the LCw-3PFU was also was not addressed nor was the fact there could have been an issue with conversion and metabolism of fatty acids in prostate cancer subjects. By not differentiating fish types or individual PUFAs, in which some may be more beneficial than others, the effect of beneficial omega-3 PUFAs could be diluted. Also, if the quality of the fish oil was compromised via rancidity or environmental contamination, the benefits of the PUFAs would be muted.

A few other things that would make a well-informed practitioner question the results of this study include the fact that  trans fat,15a known health-damaging fat, was inversely related to prostate cancer risk and that 54% of the participants were smokers, a known risk factor for cancer.

Yet, with all these flaws and caveats, this study still added to the controversy in fish oil trials and prostate cancer.

Back to the Positive

Moving beyond the negative press, a few studies on the benefits of fish oils made headlines that may have not gained the attention they deserve – specifically, the role of essential fatty acids and fish oil in relationship to hostile behavior and brain health. For instance, one study demonstrated that aggressive behavior and ADD symptoms were negatively correlated to levels of omega 3-fatty acids in prisoners.5 Furthermore, another study found that nutritional supplements that included fish oil decreased aggressive incidents in young male prisoners.17

These results support the role of fish oil in brain health and behavior. So, stay tuned, as promised I will review more in my follow-up to this blog.