Why We Are Addicted to Food- Part II

A few weeks ago, I promised I would review more on the biochemistry that links food to addiction. I left you hanging an extra week due to the end of the month and the timing of my May Top Holistic Health Reads.

Hopefully, you had time to think more about the awareness of how certain foods react in your body. Now, let’s get our “geek-on” and move onto the science of the situation. 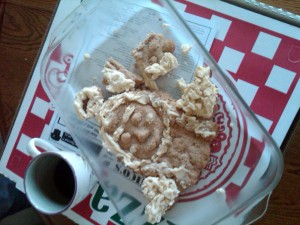 How Food Can Create Addiction

Do you know people that literally have to hide from certain foods for fear they will overindulge? I have had patients that report that they avoid the chip aisle, stealthily sneak by the chocolate, and run from the “natural gummy bears” display!

How is it that humans, arguably one of the most intelligent mammals, can be hijacked from their smarts and stolen by their taste buds? Let’s look at what happens to our brains and behaviors when “palatability” and pleasure are scientifically manipulated.

According to a 2001 study, “Palatable food stimulates neural systems implicated in drug dependence; thus sugar might have effects like a drug of abuse.” This study was done with rodents who were given 25% glucose solution with chow for 12 hours, then were deprived of food for 12 hours each day. The researchers found that the rodents imbed double the amount of glucose in 10 days and developed an “excessive intake” in the first hour of daily access! They researchers found evidence that sugar intake sensitized dopamine D-1 receptor binding and opioid mu-1 receptors, similar to drugs of abuse.  Furthermore, D-2 binding decreased in the dorsal striatum, an area in the forebrain that helps coordinate motivation with body movement, but has a variety of functions including reacting to stimuli.

In a human study, researchers also assessed the role of dopamine and its rewarding effects in the nucleus accumbans (NA) on food motivation. The small study of 10 food-deprived subjects evaluated the effects on extracellular dopamine in the striatum of the brain in response to food using positron emission tomography (PET) and [11C] raclopride (a completive binder for endogenous dopamine). Methylphenidate, a drug that blocks dopamine transporters, was used to amplify dopamine changes. The researchers’ results supported some of the findings of the rodent studies. Specifically, food stimulation when preceded by methylphenidate versus placebo increased desire for food. The authors concluded, “These results provide the first evidence that dopamine in the dorsal striatum is involved in food motivation in humans that is distinct from its role in regulating reward through the NA. In addition it demonstrates the ability of methylphenidate to amplify weak dopamine signals.”

The scientific interest in this concept of “food addiction” continues to grow in evaluating both neurobiological and behavioral aspects that are shared between substance abuse and excess food consumption. For example, in an article in Current Drug Abuse Reviews, binge eating disorder (BED) was found to have similar characteristics with addictive behaviors. The authors stated that behavioral and clinical similarities between BED and addiction could be linked to the dopamine activation. However, BED and drug addictions also differ in that BED is usually linked to an episode of out-of-control eating versus ingesting a substance with higher frequency and a greater quantity than intended over a non-specific time period. Still, one may argue this is more of semantics with a diagnostic labeling issue.

In fact, this argument in terminology does exist among experts. One of the most well recognized arguments is that the DSM-IV substance dependence criteria (the diagnostic manual for mental health disorders) also applies to overeating and the preliminary validation of the Yale Food Addiction Scale.

Furthermore, deregulations in hormonal regulators of hunger, satiety, adiposity levels (leptin, ghrelin), and insulin can also lead to imbalanced eating patterns. Combinations of these factors, genetic predispositions, and changes in the brain reward symptoms related to palatability and food quality can all affect food motivation.

Areas in the brain that are activated in response to appetizing foods or food cues include the dorsal striatum, insula, orbitofrontal cortex, amygdala, nucleus accumbens, substantia nigra, ventral tegmental area, and lateral hypothalamus. Various responses of different neurotransmitters and hormonal signals in these brain pathways can act to increase or decrease food behavior.

There is also some evidence that obesity may have dysregulated brain stress systems and deficiency in inhibitory food responses. Furthermore, studies have even demonstrated that the incentives for sugar could be regulated by amygdalar circuitries that trump homeostatic eating. For example, one randomized study with 12 overweight or obese men found that “compared with an isocaloric low-GI meal, a high-GI meal decreased plasma glucose, increased hunger, and selectively stimulated brain regions associated with reward and craving in the late postprandial period, which is a time with special significance to eating behavior at the next meal.”

What to Do With an Addicted Foodie Brain

Some research exists that modulating various response pathways to food through neurotransmitters may be helpful with food cravings and addiction. For example, compulsive overeating may be linked to low serotonin in the brain and cause the anterior cingulate gyrus to overwork. Impulsive overeating may be characterized by low dopamine in the brain and decreased activity in the prefrontal cortex.

I have used a combination of surveys and testing for urinary metabolites of neurotransmitters, nutrient deficiencies, and functional pathways in order to support my patients’ reserve to stay away from foods which trigger overeating and loss of control, and replace them with healthy foods which nourish the body.  I also check for any microbiome disturbances, hormonal imbalances, stress responses, SNPs in neurotransmitter formation (such as MTHFR), and that social and emotional support systems are in place.

Meule A, Kübler A. The Translation of Substance Dependence Criteria to Food-Related Behaviors: Different Views and Interpretations. Frontiers in Psychiatry. 2012;3:64. doi:10.3389/fpsyt.2012.00064.