Trick or Treat? GMOs Not Just For Halloween… 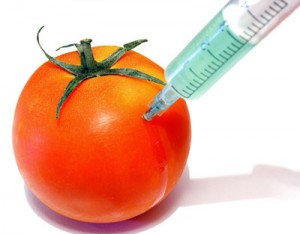 In a previous blog, I discussed some of the dangers of GMOs. It seems appropriate, that in the month of Halloween, to re-visit this scary subject of exploding watermelons, produce injected with animal DNA, and Frankenfish. Add to the fact that these foods now reproduce in our own body, creating pesticide factories in our gut that travel throughout our blood stream; it’s a scientific Nightmare on Wellness Street.

According to the Institute for Responsible Technology, by definition,

A GMO (genetically modified organism) is the result of a laboratory process of taking genes from one species and inserting them into another in an attempt to obtain a desired trait or characteristic, hence they are also known as transgenic organisms. This process may be called either Genetic Engineering (GE) or Genetic Modification (GM); they are one and the same.

The process of creating a genetic organism sounds like something from Frankenstein’s laboratory:

Because living organisms have natural barriers to protect themselves against the introduction of DNA from a different species, genetic engineers have to find ways to force the DNA from one organism into another. These methods include:

The Flip Side: Warnings from Health Experts

According to Ronnie Cummins, president of the Organic Consumers Association, the dangers of GMOs became apparent in 1994. At that time, tryptophan was pulled from the market, deeming it unsafe; however, the real issue was that the source of the product was genetically modified, not in the amino acid itself.

In his interview with Dr. Mercola, Ronnie Cummins explains:

Unfortunately, the FDA came to the rescue of the genetic engineering industry by trying to cover up the fact that L-tryptophan was and is perfectly safe unless it’s genetically engineered. They tried to gloss over the fact that this was a very unique batch unlike any others previously.

RC: Yeah. Infertility. I mean, there was a recent study up in Canada that showed that a huge percentage of pregnant women have the BT, the genetically engineered BT bacterium in their blood stream and that it’s in their newborns. It’s like, do we want to turn human beings into pesticide factories where we’re all manufacturing BT in our gut? There is no reason for people to be exposed to experimental foods simply because biotech chemical seed companies like Monsanto want to make more money.

If our government is not willing to listen to independent scientists in public health, specialists and to the public and ban this technology then at least give us the chance to choose whether or not we want to be human guinea pigs in the marketplace. In other words, let’s have labels on GMO food like the European Union has, like Japan, South Korea and many other nations of the world have.

These GMOs are not just linked to reproductive issues, but they have been shown to have an antigenic immune response in our bodies leading to many other health conditions. According to the Organic Consumers Association:

Eighteen years later, investigations of genetically engineered foods are confirming scientists’ suspicions that biotech’s scattershot technique of spraying plant cells with a buckshot of foreign genes that hit chromozomes in random spots would trigger the expression of new allergens, change the character of plant proteins, and ultimately prove to be toxic to mammals’ vital organs.

The Frightening Deception in Labels:

The only way you can guarantee that GMOs aren’t in your food is to buy Organic or buy verified GMO Free products. Some tips to keep in mind, according to Natural News:

#1) There is GE contamination in almost everything. Even “non-GMO” food products almost always contain trace levels of GMOs (often between .01% and 0.5%). A test for the mere presence of GMOs is not considered conclusive. What’s important is the level of GMOs in a particular food item. Some of the “natural” items tested by the Cornucopia Institute showed GMO contamination levels between 28 and 100 %, which means the key ingredients in those cereals are most definitely genetically engineered from the source (and it’s not just a chance contamination from some other nearby field).

#2) All GMO tests are merely a “snapshot” that can change over time. Foods that test free of GMOs today may contain higher levels tomorrow due to supply line errors, contamination, supply source changes, and so on. At the same time, foods that test at high levels of GMOs today may test at lower levels in the future or even for different batches from the same manufacturer. Sometimes manufacturers are lied to by their suppliers. Some manufacturers test for GMOs in every batch, but others take a “don’t ask don’t tell” approach where they don’t test because they’d rather not know.

Learn more about if your breakfast cereal that is “gluten free”, “natural”, or “whole grain” is also “GMO free:” http://www.naturalnews.com/033838_breakfast_cereals_GMOs.html#ixzz1aiBcKd00

When the Burden of Proof Hurts the Potential for Good:

Remember my topic on the pitfalls of evidence based medicine. The problem with GMOs, even this imperfect science isn’t forthright. When the burden of proof is placed on the producer of the product to show harm vs. safety, the result is a massive experiment with our food supply.

Dr. Smith discusses this topic of bad science in a recent study that found multivitamins harmful in a select population:

A newly released study suggests that multivitamin and nutrient supplements can increase the mortality rate in older women [1]. However, there are several concerns about the study’s methods and significance.

Another issue to munch on is the recent report on how the FDA allowed fish that were contaminated with high levels of PAHs (polycyclic aromatic hydrocarbons) after the BP oil spill into our food supply. So, whose looking out for us?  (This is another reason why I suggest organic, non-processed foods, and to know your source of not just food but supplements. BTW check out Vitalchoice for seafood).

What this all translates to is that we have the power to modulate our health by what we put in our mouth and our various lifestyle choices. It is up to us to educate ourselves on what we are putting in our mouth and determining if the supplier can be trusted. Furthermore, regarding supplement quality, we need to ask: is the supplier there to answer our questions, verify the quality, and assist in its proper use?  “Curing” symptoms with pills or supplements is not working. Individualized medicine and prevention by good lifestyle choices is.

Even the World Health Organization is paying attention to how to prevent not only high health costs but high death rates. A recent article in Medscape, reported the recent worldwide initiative health summit on the top 4 causes of death, which are modifiable by lifestyle factors:

Dr. Collins: The reason we group them together (again, in public health; probably from a medical perspective we wouldn’t necessarily put them in the same category) is that they do have common risk factors that are easily modifiable with lifestyle changes — for example, tobacco control, reduced alcohol consumption, healthy diets, and exercise. When we do this, we pretty much prevent all 4, which is a convenient catch-all. But in real life it doesn’t work this way.

Another reason these 4 conditions are grouped together is that there was a World Health Organization (WHO) report in 2005, so this name basically comes from the WHO. When they looked at the burden of corporal disease, they realized that almost 60% of all deaths are caused by these 4 conditions, and 80% of these deaths are happening in lower- and middle-income countries. We realized that these 4 diseases are really responsible for the global disease burden, and it made sense from the public health perspective to address them as a group.

It’s now an exciting time in health care. Patients, doctors, and the government are all making efforts to come to voice the importance of prevention and make changes. Maybe we don’t all agree on how to make this change, but at least we agree the change needs to be made!

Smith, R. What Kind of Medical Study Would Have Grandma Believe that Her Daily Multivitamin is Dangerous? OMNS. October 12, 2011. http://orthomolecular.org/resources/omns/v07n10.shtml

FOEI. Who benefits from GMOs? An Industry Built on Myths. February 2011. 112. http://www.foei.org/en/resources/publications/pdfs/2011/who-benefits-from-gm-crops-2011

Be sure to check out my informational blog on Saratoga.com which includes:

1. Naturopathic Philosophy Highlight Fun Fact: How Stress and Thinking Affects Your Health
2. What’s Up with Mold? Check out my answer and more on Dr. Oz’s Sharecare.
3. Updated Link Resources on my homepage
4. Radio For Your Body–Mind-Soul: