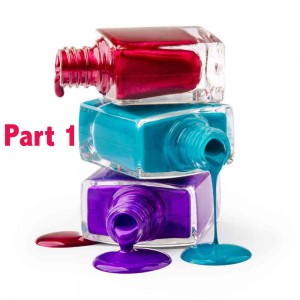 Ok class, Dr. Doomsday is back!

There has been a recent explosion of studies regarding the negative impacts that our “chemical soup world” has on our health. Second to only the microbiome, I’ve probably written the most blogs on how our environment favorably or unfavorably modulates our genetic destiny on disease expression. (For example, here’s one from the DFH blog page…exciting!)

No, my intention is not to scare the buggers out of you or to make you homebound amongst your HEPA filters, constant diffusing, and bubble tape. Rather, my intention is for you to be aware that HEPA filters and diffusing are good ideas. This allows you to empower your health and decrease overall exposure in the environment you have the most control over-your own home.

The knowledge of how much we are exposed to chemicals in our world is especially important for those who are chemically sensitive, like me. I was not endowed with a robust genetic destiny for clearing out toxins in my body. I have a lot of SNPs, single nucleotide polymorphisms, in certain enzyme pathways that assist with biotransformation and detoxification. Due to this, I have spent a great amount of time researching toxins and their pathways of excretion and brainstorming ways that I can use this information to assist my family, clients, and my BREAKFREE readers.

These genetic differences that make for an “environmentally sensitive individual” aren’t mutations, but rather a change in the power of response in a certain biochemical pathway. For example, the most famous SNP right now is probably MTHFR (methylene tetrahydrofolate reductase) due to its far-reaching effects on a variety of methylation and sulfation pathways. Besides its role in cardiovascular health, mood, and immunity, a MTHFR SNP can cause some individuals to be more susceptible to environmental exposures than others.

However, it’s important to remember that this is only one enzyme that must be balanced with many more. For example, a SNP, or single nucleotide polymorphism, in MS (methionine synthase), COMT (catechol-O-methyltransferase), Methyl-transferases, STM1, GSTP1 (glutathione transferases), Apo E 4 (apolipoprotein E 4), and/or Impaired Metallothionein function can also impeded optimal removal of toxins and increase retention of toxins after exposure. For a review of how various SNPs interact with each other consider reading Suzy Cohen’s blog, she did a wonderful summary here that also includes action steps.

The Scary Facts For Empowering Awareness

Here are some of the latest studies on toxins in our world and I’ve also included action steps on how to decrease risk of exposure underneath them. Therefore, you won’t be left feeling annoyed with “TMI” on chemicals. Rather, you can feel empowered with some information on how to modulate your wellness in a “chemical world” and find more compassion for yourself or for those around you who seem to be “overly sensitive.”

The Link of Pesticides to Modern Neurological Diseases

You’ve got to love researchers who connect the dots between gluten, glyphosate, gut bugs, and the depletion of a mineral (manganese, Mn)! Well, at least I do.

In their latest study, S. Samsell and S. Seneff , “ investigate the impact of Mn on physiology, and its association with gut dysbiosis as well as neuropathologies such as autism, Alzheimer’s disease (AD), depression, anxiety syndrome, Parkinson’s disease (PD), and prion diseases. Glutamate overexpression in the brain in association with autism, AD, and other neurological diseases can be explained by Mn deficiency.”

I just can’t sum it up better than the their abstract that explains the mechanisms on how glyphosate’s depletion of Mn is linked to oxidative stress, osteomalacia, gut bugs, and fertility:

Mn superoxide dismutase protects mitochondria from oxidative damage, and mitochondrial dysfunction is a key feature of autism and Alzheimer’s. Chondroitin sulfate synthesis depends on Mn, and its deficiency leads to osteoporosis and osteomalacia. Lactobacillus, depleted in autism, depend critically on Mn for antioxidant protection. Lactobacillus probiotics can treat anxiety, which is a comorbidity of autism and chronic fatigue syndrome. Reduced gut Lactobacillus leads to overgrowth of the pathogen, Salmonella, which is resistant to glyphosate toxicity, and Mn plays a role here as well. Sperm motility depends on Mn, and this may partially explain increased rates of infertility and birth defects. We further reason that, under conditions of adequate Mn in the diet, glyphosate, through its disruption of bile acid homeostasis, ironically promotes toxic accumulation of Mn in the brainstem, leading to conditions such as PD and prion diseases. (1)

The EPA has issued a moratorium on use of a type of pesticide theorized to be responsible for plummeting bee populations. Neonicotinoids are a class of common pesticides that recent research has pointed to as being harmful to birds, bees and other animals. The EPA previously approved their use, but outcry over the damage being done has caused the agency to reverse course while more studies are done. On Thursday, the EPA sent letters to people and companies that have applied for outdoor use of the pesticide, saying that new use permits won’t be issued. (2)

Pesticide exposure was the contributing factor to increased cardiovascular disease risk and inflammation in premenopausal, obese women, according to a new study. (3-4) Science Daily reports:

The study analyzed the amount of endocrine-disrupting chemicals in fat tissue and blood samples from 121 obese women who underwent bariatric surgery at S. João Hospital in Porto. Among the participants, 73 were classified as premenopausal and 48 were postmenopausal. The researchers tested the participants’ fasting blood glucose and cholesterol. Using the Framingham risk score, the researchers assessed the women’s 10-year risk of developing cardiovascular disease.

Researchers found that among premenopausal women, women with higher concentrations of environmental estrogens in their visceral fat tissue from the belly were more likely to have higher average blood sugar levels. Among premenopausal women, those with higher levels of environmental estrogens in their blood tended to have more inflammation and faced a greater risk of cardiovascular disease on the Framingham scale.(4)

A new study showed that exposure to biocides, such as herbicides, increased resistance of certain microbes to antibiotics. This means the minimum inhibitory concentration (MIC), which is the lowest amount of an antimicrobial needed to inhibit the pathogen, will increase due to more of the drug being needed to cause harm on the unwanted critter. The study authors reported:

When induced, MICs of antibiotics of five different classes changed up to 6-fold. In some cases the MIC increased, and in others it decreased. Herbicide concentrations needed to invoke the maximal response were above current food maximum residue levels but within application levels for all herbicides. Compounds that could cause induction had additive effects in combination. (5)

The Economic Burden of Chemicals

The European Union examined the economic burden of exposure to EDCs (endocrine-disrupting chemicals), they report (bold emphasis mine):Top of Form

Expert panels achieved consensus at least for probable (>20%) EDC causation for IQ loss and associated intellectual disability, autism, attention-deficit hyperactivity disorder, childhood obesity, adult obesity, adult diabetes, cryptorchidism, male infertility, and mortality associated with reduced testosterone. Accounting for probability of causation and using the midpoint of each range for probability of causation, Monte Carlo simulations produced a median cost of €157 billion (or $209 billion, corresponding to 1.23% of EU gross domestic product) annually across 1000 simulations. Notably, using the lowest end of the probability range for each relationship in the Monte Carlo simulations produced a median range of €109 billion that differed modestly from base case probability inputs. Conclusions: EDC exposures in the EU are likely to contribute substantially to disease and dysfunction across the life course with costs in the hundreds of billions of Euros per year. These estimates represent only those EDCs with the highest probability of causation; a broader analysis would have produced greater estimates of burden of disease and costs. (6)

Oregon could become the first state in the country to regulate agricultural use of antibiotics, should lawmakers approve bills that would prohibit giving antibiotics to healthy farm animals and require factory farms to report how the drugs are used in their operations. (7)

Oregon’s biggest city on Wednesday banned the use of an insecticide on city lands blamed by conservationists as a factor in the decline of honey bees in recent years. Despite protests from farmers who argued the insecticide was crucial for crop production, the Portland City Commission voted unanimously to immediately suspend use of products that contain neonicotinoids. Such pesticides are widely used on crops and on plants as well as trees in gardens, parks and commercial nurseries.(8)