It’s hard to escape the scary facts of living in our world filled with toxic chemicals. It’s easy to get overwhelmed and want to hide yourself in a non-BPA and phthalate free plastic bubble. Still, as I’ve written before, knowing what the problem is helps you to better implement the remedy. It’s a sad circumstance that this blog will focus on some gloomy evidence of harmful substances lurking in our environment. But, to follow the clouds, I’ll give you some shining examples of action steps for decreasing these exposures. For parents-to-be, you will want to pay particular attention as evidence is demonstrating the negative prenatal and in-utero effects of harmful chemicals.

The European Union recently examined the economic burden of health implications from exposure to EDCs (endocrine-disrupting chemicals). The results were overwhelming, with estimated costs of hundred billions of dollars:

Expert panels achieved consensus at least for probable (>20%) EDC causation for IQ loss and associated intellectual disability, autism, attention-deficit hyperactivity disorder, childhood obesity, adult obesity, adult diabetes, cryptorchidism, male infertility, and mortality associated with reduced testosterone. Accounting for probability of causation and using the midpoint of each range for probability of causation, Monte Carlo simulations produced a median cost of €157 billion (or $209 billion, corresponding to 1.23% of EU gross domestic product) annually across 1000 simulations. Notably, using the lowest end of the probability range for each relationship in the Monte Carlo simulations produced a median range of €109 billion that differed modestly from base case probability inputs.1

In September 2015, the Endocrine Society’s second Scientific Statement on Environmental endocrine-disrupting chemicals (EDCs) was released. The statement reported on the key points found in their comprehensive review of literature which examined the connection found between endocrine disruption and various health issues.2 This most recent review provided even more evidence of harm which was stated in their first Scientific Statement in 2009. Their first report demonstrated how EDCs effect male and female reproduction, breast development and cancer, prostate cancer, neuroendocrinology, thyroid, metabolism and obesity, and cardiovascular endocrinology.3

The Endocrine Society’s second evaluation focused on toxins with the most proof available which included bisphenol A, phthalates, pesticides, persistent organic pollutants such as polychlorinated biphenyls, polybrominated diethyl ethers, and dioxins. The evidence was extracted from mechanistic, experimental, animal, and epidemiological studies. The results demonstrated negative impacts of EDCs in the following seven areas:

According to the abstract:

The Statement also included thorough coverage of studies of developmental exposures to EDCs, especially in the fetus and infant, because these are critical life stages during which perturbations of hormones can increase the probability of a disease or dysfunction later in life. A conclusion of the Statement is that publications over the past 5 years have led to a much fuller understanding of the endocrine principles by which EDCs act, including nonmonotonic dose-responses, low-dose effects, and developmental vulnerability. These findings will prove useful to researchers, physicians, and other healthcare providers in translating the science of endocrine disruption to improved public health. 2

According to the study, critical times of prenatal exposure have lasting epigenetic and health consequences. The results of these exposures can be immediate or latent, known as developmental origins of health and disease (DOHaD). The summary continues:

During early development—the fetus and infant—exposures to proper levels of hormones are needed for normal ontogenic processes to occur. Too much or too little of a hormone can result in neurological impairments (eg, thyroid hormone deficiency), disorders of sexual development (eg, abnormal androgen or estrogen levels), or even death. Exposure to exogenous compounds such as EDCs that can mimic or antagonize these and other hormonal systems change the developmental trajectory. Depending on when an individual is exposed, the nature of the EDC, and its levels, an adverse outcome may be evident at birth, or there may be a latent disease outcome. This latter concept, often referred to as the developmental origins of health and disease (DOHaD), underlies latent effects of EDCs on every endocrine system studied to date. Increased knowledge of the role of EDCs in the DOHaD across multiple systems is due, in part, to a measurable shift in the DOHaD funding portfolio of the National Institute of Environmental Health Sciences over the past decade (4), as well as to changes in other funding agencies in the U.S. and internationally.2

There are multiple complex mechanisms in which EDCs can effect fetal development. For example, they can interact non-specifically with hormone and nuclear and membrane receptors, including steroid membrane-associated receptors, peptide and protein receptors, and neurotransmitter receptors. Furthermore, the effects are synergistic with dose additivity. This means that the impact of exposure can be profound. According to the statement (bold emphasis mine):

EDCs also act on enzymes involved in steroidogenesis, steroid metabolism, and protein/peptide synthesis. They affect intracellular signaling processes and cell proliferation, growth, and death. There are hundreds, if not thousands, of papers showing that EDC exposures affect expression of genes and proteins in different cells, tissues, and organs. Recent evidence suggests that some EDCs may cause molecular epigenetic changes, including in the germline, which in turn may lead to transgenerational effects of EDCs on numerous organ systems. This latter point is important because it suggests that the legacy of EDC exposures may go beyond the individual and can last even if there is no further exposure or despite efforts to clean the environment.

This timeline from TEDx (the Endocrine Disruption Exchange, Inc.) is an interesting overview showing studies done with lab animals which correlate various consequences of different chemical exposures with critical times of development.4

One area in which epigenetic changes can occur with these exposures is with our nation’s obesity epidemic. A recent mini-review in Endocrinology that summarized in vitro, in vivo, and transgenerational studies reported, “Developmental exposure to obesogenic EDCs is proposed to interfere with epigenetic programming of gene regulation, partly by activation of nuclear receptors, thereby influencing the risk of obesity later in life.” 5

Many other studies have shown the negative developmental effects of EDCs on prenatal health, including correlations to miscarriages, preterm birth, birth defects, reproductive issues, genital defects, autism, and more.6-14 The scary news is no one is immune. In 2009, the CDC (Center for Disease Control and Prevention) issued a fourth report on human exposure from nationally representative samples for 1999-2004 and found that the average volunteer of this study had over 200 chemicals in their bodies. Seventy-five of these substances had never been seen in prior studies.15 Since the report’s release, the CDC has issued several updated tables due to more chemicals being released into our world and their need to be monitored as potential harmful or toxic substances.16-17

The Environmental Working Group (EWG) found an even greater extent of burden than the CDC in their 2009 study. They reported that 493 chemicals are present in Americans of all ages.18 In their “2004 Body Burden Report” of a sampling of 10 babies, 287 industrial chemical pollutants found in the cord blood from a sample of 10 babies. According to this report:

Of the 287 chemicals we detected in umbilical cord blood, we know that 180 cause cancer in humans or animals, 217 are toxic to the brain and nervous system, and 208 cause birth defects or abnormal development in animal tests. The dangers of pre- or post-natal exposure to this complex mixture of carcinogens, developmental toxins and neurotoxins have never been studied.19

It seems reasonable that moms-to-be should be extra careful about environmental exposures. This infographic from Dr. Mercola lists top toxins to avoid if pregnant, but everyone will benefit from dodging them: 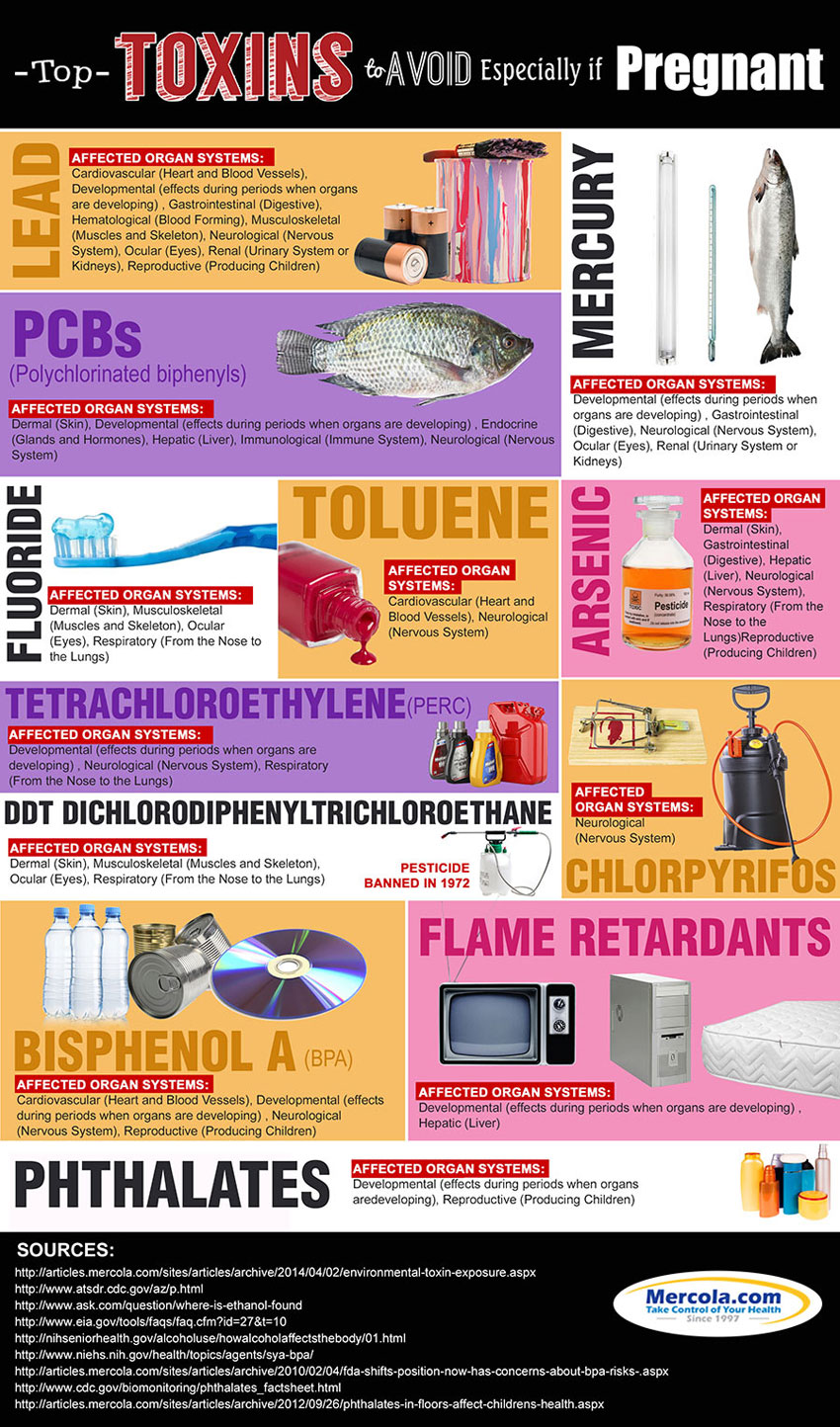 Fathers aren’t off the hook. They need to be careful as well. Not only can chemicals negatively impact sperm and fertility,20-23 but recently a study showed that fathers also pass down epigenetic information based on their current health status, to their children. 24-25 In this study, obesity was specifically studied. Science Daily reported:

Turns out dads are also eating for two. A study reveals that a man’s weight affects the heritable information contained in sperm. The sperm cells of lean and obese men possess different epigenetic marks, notable at gene regions associated with the control of appetite. The comparisons, which included 13 lean men and 10 obese men, offer one biological explanation for why children of obese fathers are themselves more predisposed to obesity.25

Below are three more helpful hints to protect yourself from this chemical soup world:

Remember, the chemicals in these products are largely unregulated. In fact, just recently a bipartisan law is on the table hoping to give the FDA more control and power over the safety of chemicals.26 Therefore, researching for yourself is very important.

4. Consider being a mammalian aroma-emitting diffusor. Essential oils provide profound benefits for modulating the immune system and overall wellness. They are also powerful antioxidants and assist with detoxification. You can read my latest blog on sesquiterpenes, cedarwood, and myrrh here.

Here’s another video on what to avoid and what to do for prenatal health:

In my upcoming book, BreakFree Medicine, I discuss the topic of environmental toxins as one area to address on the path to better health. Here’s a little sneak peek from my book on this topic and how some are more sensitive to chemicals than others:

Just as everyone responds to emotional stressors differently, not everyone is affected in the same way by environmental exposures; two people who are subject to the same pollutant can have two very different responses. One’s genetic makeup, duration and quantity of exposure, medical history, lifestyle, and other factors all influence one’s reaction to toxic exposures. In short, the potential of environmental illness is based on the degree of exposure to toxins over a period of time, combined with one’s unique ability to remove them from the body.

You can geek out more on the genetic SNPs here if you’d like. I think it’s important to remember that, just because you aren’t experiencing symptoms, doesn’t mean that decreasing your toxic burden will not help your health. As I reported above, the health and economic burden of symptoms that you may not think are “toxic” is profound. Here’s to your empowered choices moving forward and a healthier next generation.