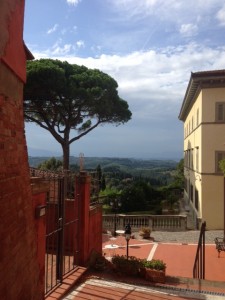 After an amazing vacation in Italy, I’m feeling refreshed, grateful, contemplative, and graced with many new friends and International acquaintances. It was a truly magical and invigorating trip.

Why Italy? There were a few reasons.

Besides the obvious of a bucket-list check-off, experiencing an Andrea Bocelli opera, “connecting with my roots”, and just the fact that it’s Italy, there was another undisclosed purpose for my mini-sabbatical. It was to allow some space for my mind to wander and calmly assess the next stage for me and BreakFree Medicine. The answer was made clear to me and I will share it at the end of this post.

One thing that really inspired me in Tuscany, besides its beauty, was the stability and calmness of its inhabitants. There seemed to be an innate tranquility residing in most of the people that surrounded me. I’m not speaking of an unnatural happy-go-lucky, serene attitude. Rather, Italians seemed as a whole to be a lot more versed in being in the moment to fully enjoy life, regardless of circumstances. Even with customer complaints, yipping dogs, and crowded streets, there was an obvious air about the people of accepting whatever was happening at the time, rather than trying to fix it, change it, or rush through it. This embracing of time took some getting used to for a resident New Yorker, but luckily it became contagious.

In this blog, I’ll review some health tidbits I took away from my trip to Tuscany and explain why Italy is a perfect example of integrated wellness. Besides the fact that Europeans tend to be healthier, the Italian island of Sardinia is reported to have the highest number of male centenarians in the world, and this classifies it as a blue zone.

Blue zones are regions in the world where people tend to live longer, healthier lives. The term was popularized by author Dan Buettner who traveled these 5 areas that spanned the globe. According to NPR:

One of the most striking people he met during his travels was 104-year-old Giovanni Sannai of Sardinia. “He was out chopping wood at 9 in the morning,” Buettner tells guest host Audie Cornish. “He started his day with a glass of wine and there was a steady parade of people coming by to ask his advice. That’s one of the characteristics of the Sardinian Blue Zone — the older you get, the more celebrated you are.”

In our food obsessed culture, one of the most common hypotheses for these centenarians’ long lives has been dietary. One review of centenarians in Italy reported that the commonality of the diets of these 19 people was in fact related to following a low glycemic and Mediterranean diet, high in fruits and veggies. However, the researchers noted, “Overall, our data confirm our previous suggestion that longevity concerns subjects, living in small town, without pollution, with different working conditions, lifestyles and close adherence to a Mediterranean diet.”

So, there is more to longevity than diet, its the interaction of genes, environment, and the modulation of epigenetics with social factors.

As noted above, with the wood-chopping Sardinian, some habits of centenarians seem outright against integrative and conventional health advice!

Can you imagine going to your doc and being told the following at your yearly physical?

They make rituals of pleasure a part of their day. For example, they might have a shot of whiskey or smoke a fine cigar every day. They aren’t addicted to these substances, rather, they look forward to savoring both the substance and the ritual. Think Japanese tea ceremony.”

Are not co-dependent. They don’t stay in relationships that are unhealthy or dysfunctional, or with people who have addictions.

Don’t go to doctors—partially because they’ve outlived their doctors. Because they aren’t spending time at doctors, they aren’t focused on their possible decline.

Are future-oriented. They make long-term plans because they see themselves thriving in the future.

Do Blue Zones Support the Recent Push-back on Paleo?

There’s been a recent push-back on the definition of what Paleo really is, specifically regarding how grains and dairy may in fact be more Paleo than once thought. One reason is that evidence for epigenetics and nutrigenomics is becoming more available through articles reporting on genetic variants for salivary amylase and lactose tolerance.

It appears that these Blue Zones also provide further support for going “against the grain” in current Paleo health trends in several ways:

This video below discusses in depth various aspects of human nutrition across time is based on an anthropologist’s and ancient diet researcher, Christina Warinner.

Disclaimer: I believe the Paleo Diet is a wonderful protocol for most people, but I believe in individualizing diets and that total avoidance of any food group to the extreme could be detrimental. Dr. Christianson and I discuss this in my latest podcast with DFH and how carb-free may not be “thyroid friendly.”

This brings me to my announcements.

1. My interview with Dr. Christianson on the new Clinical Rounds Podcast: Mastering the Thyroid Part 1: Demystifying Hormone Diagnoses, and How to Rest Your Adrenal is released!

You can listen here.

3. Dr. Keesha’s course is about to start!

You may remember my previous announcement of my friend and college’s webinar introduction of “The Libido Cure.” Now, the actual training and course is fast approaching and Dr. Keesha asked me to spread the word.

If you’ve ever wished you had more energy and vitality, you need to know about this.

Over the next 7 weeks, Dr. Keesha will help you ignite your sex life, lose pounds of fat, improve your focus and memory, and get in the mood…for whatever you are passionate about!

All without surgeries, synthetic hormones, prescription pills, or fad diets.

Dr. Keesha will reveal why this is true and share her secrets to boosting your desire and zest for life – without hormones or drugs.

Register and reserve your spot for this amazing training now.

I’m returning to the Albany area and will be starting part-time phone consults in September. I will be taking a limited amount of clients, as I will also be continuing with DFH as an independent consultant position vs. employee. I missed you guys and needed to head back to New York!

Look for upcoming announcements on how to book an appointment.