Cholesterol to the Rescue! (Cholesterol’s not the Bad Guy: Part 2) 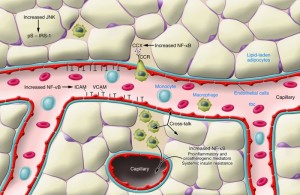 A few weeks ago, I wrote on blog defending the perceived tyrant in heart health, cholesterol. In it,  discussed it’s necessity in many vital functions:

Cholesterol is needed in the body for a variety functions, it forms a protective layer around every cell in your body. It is a pre-cursor to important sex hormones, fat-soluble vitamins (including Vitamin D!), and is needed to make bile salts for the breakdown and use of dietary fats. Cholesterol is found in large amounts in the brain, adrenal gland, and nervous system. It is estimated that the liver actually makes about 40-50% and that only 50% of cholesterol from food is absorbed.

Cholesterol is so vital for health of the body, if it is reduced to too low of an amount; the liver is put to work and produces more. Due to its variety of functions, cutting it down so low, below 200, could be causing negative side effects outside of the heart.

This week’s focus will not focus so much on the heart, but will examine the connection between low cholesterol and brain health.

You Really are a Fat Head! (And that’s good!)

Approximately 25% of your cholesterol is located in your brain and your retina is approximately 60%. In fact, Low Density Lipoprotein (the “bad cholesterol”) is actually a transport mechanism to the eyes and omega fatty acids have been shown in various studies to assist in neurotransmission and neurotransmitter production in the brain.

What happens when the body’s brain and eye’s don’t get the necessary precursor, cholesterol, to function? Read on for an eye and brain changing blog…..

“Our study shows there is a direct link between cholesterol and the neurotransmitter release,” said Shin. “And we know exactly the molecular mechanics of what happens in the cells. Cholesterol changes the shape of the protein to stimulate thinking and memory.”

An article by VitalChoice lends support to the above study on cholesterol, brain function, and memory. This article specifically links omega ratio between cardiovascular and Alzheimer’s disease.

Some epidemiological studies suggest that omega-3 fatty acids from fish may protect against Alzheimer’s disease, while others do not. And most clinical trials testing supplemental omega-3 fish oils have yielded disappointing results.  One reason for such divergent results is that some people carry a variation of the ApoE gene, which plays a key role in the transport of cholesterol and other lipids involved in brain composition and function.

The effect of omega-3 DHA from fish fat appears minimal in people with the ApoE4 variation (allele) of this gene. Carriers of the ApoE4 gene tend are the most responsive to changes in dietary fat and cholesterol. Surprisingly, some epidemiological studies suggest omega-3-rich diets reduce cognitive decline only in people who do not carry the ApoE4 gene.

This may be because, as other studies suggest, there’s a link between the ApoE4 gene and suffering from dysfunctional metabolism/absorption of dietary omega-3s.

A big factor that relates to studies showing positive or negative effects with fatty acids and the brain may be related to the body’s ability to metabolize cholesterol. Another Gut-Brain connection! According to the Linus Pauling Institute:

Prior to absorption in the small intestine, fatty acids must be hydrolyzed from dietary fats (triglycerides, phospholipids, and cholesterol) by pancreatic enzymes (4). Bile salts must also be present in the small intestine to allow for the incorporation of fatty acids and other fat digestion products into mixed micelles. Fat absorption from mixed micelles occurs throughout the small intestine and is 85-95% efficient under normal conditions. Humans can synthesize longer omega-6 and omega-3 fatty acids from the essential fatty acids LA and ALA, respectively, through a series of desaturation (addition of a double bond) and elongation (addition of two carbon atoms) reactions (Figure 2)

One way to ensure that your body has the raw materials for brain health is to consider fish oils, but also to eat fat! Dr. Mercola explains how to many carbohydrates via Insulin shuts off fat metabolism:

Cholesterol is needed for many functions in the body. Switching high carbs to low fat is damaging to your heart.

All in all, Dr. Seneff’s research makes a very compelling case for the vital importance of getting appropriate sun exposure and avoiding fructose in your diet. To summarize into layman’s terms the two inter-related disease processes just described would look something like this:

The reversal of this disease process would then look like this:

What about EFAs and Autism or ADHD?

Dr. Mercola summarizes the importance of cholesterol, vitamin D and brain formation and how a lack of cholesterol links to brain issues:

A human child’s brain undergoes tremendous development outside the womb: mostly from birth to two years of age. As the child experiences sensory inputs from the eyes, the ears, the skin, it sprouts a massive overgrowth of nerve fibers and connects these up at millions of synaptic junctions throughout the brain. For this growth to take place, it needs an abundant and steady supply of both cholesterol and vitamin D, which it should be getting from its mother’s milk supply, as well as its own exposure to the sun.

On a good supply of fatty mother’s milk, the human baby quickly fills out with layers of fat on its thighs and upper arms. It’s almost instinctive to react to a fat baby as a healthy baby. I believe one of the biggest roles all this extra fat plays is to maintain a reserve supply of nutrients to help feed the rapidly growing brain. By the age of two the child has typically thinned out, but in the mean time this body fat has served as an excellent buffer to maintain a consistent supply of fat to nourish the explosive growth of myelin sheath throughout its brain.

At around the age of two, the normal child’s brain undergoes a massive pruning stage. Through the sensory experiences it has accumulated during its first two years of life, the glial cells in its brain have been constantly making note of which fibers transmitted useful signals to which neurons at which synapses. It has been adjusting synaptic weights correspondingly, and it is now prepared to identify those nerve fibers that turned out to be counterproductive. A process of apoptosis (cell death) ensues on a magnificent scale.

In studies on the brains of autistic children, it has been observed that one of the most striking anomalies is that their brains seem to be unwilling to perform the massive pruning through apoptosis at age two [13].

This could be because their brain’s glial cells don’t know which nerve fibers are unproductive. Signal transmission was unreliable throughout their first two years of life due to the poorly constructed myelin sheath. As the signal tried to travel down a pathway, noise eventually overtook it, and the distinction between productive and unproductive pathways was hopelessly blurred. To compound this problem, as we have seen, the signaling to control apoptosois depends critically on both cholesterol and vitamin D, so that, even if a glial cell was aware that it should prune a particular axon, it might not be able to execute on that plan.

Dr. Amen also reports on the connection of brain function and EFAs:

ADHD is not a one-treatment-fits-all disorder. In fact no single treatment has shown to be “conclusively effective for all ADHD patients”. And although there is no claim stating that nutritional deficiency is the cause of ADHD, it is commonly agreed that nutritional deficits may worsen the symptoms, especially essential fatty acids (EFA) and iron deficiency. According to a new study, insufficient amounts in both EFA and iron have shown to affect the severity of ADHD and quality of sleep.

Be sure to check out my informational blog on Saratoga.com which includes: